Does your community have volunteers? Ever added up the value of their work? Kitsap County does. 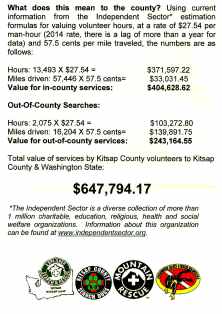 Search and Rescue volunteers had contributed more than $400,000 worth of time on services in the county, and another $243,000 helping neighboring counties.

They added up the total hours worked, and assigned a typical but conservative salary to those hours. Then they did the math. It’s amazing what volunteers do for their community, and we’re just SAR. Think of all the other volunteer groups with their varied interests and what we all bring to the places we live. It’s got to be in the millions of dollars just in Kitsap County alone.

Also at the banquet I had the pleasure of hearing some great remarks from Bainbridge Island, WA Police Chief Matthew Hamner about the value of volunteerism.

The Chief spoke not of financial benefit, but benefit to others. Human benefits. The ones that really count. He spoke of the solace received by the family of a man for whom we’d searched. The outcome wasn’t what anyone had hoped for, but the family took comfort in knowing that so many in the community were trying to help.

SAR members don’t volunteer for the adoration, but if you’re going to put out that much effort it’s nice to know it’s noticed and appreciated. The staff at Kitsap County DEM, the Sheriff’s Office and BIPD have a history of taking care of their volunteers. Last night’s banquet was one example, but they do it every day. They say thank you at the end of each mission, and when we have a need for something they do their best to help fill it.

I’m personally lucky to have bought a house and decided to live in a county where local government behaves so honorably and professionally.