There’s lots of geeks out there who can blog, FB, Instagram all on their smartphone while rebuilding their desktop with the other hand. But I have the original geek card: a ham radio license dating back to 1969. My original call sign as a “Novice” was WN7NUU. When I upgraded to “Advanced” there was a slight change to WA7NUU. I’ve declined the opportunity to pay for a special vanity call sign, as I’ve grown comfortable with my “Nothing Un Usual” signature.

I don’t use ham radio much anymore, though the hobby appears to be thriving. Despite the availability of the internet, talking to the other side of the world on “shortwave” frequencies still provides a thrill. And hams were the first to spew completely meaningless information world-wide.

You think Twitter is full of drivel? Here’s how a shortwave “roundtable net” might go on a Sunday morning.

“Good morning all on the net from WA7NUU here in Olalla, Washington. The weather here is good but things are a little tough around the house today. We’re out of whole milk and I had to use two-percent on my cornflakes. Well, that’s the report from here, now over to Fred in Anchorage. WA7NUU.”

Amazon gives you lots of metrics about sales, and I’m excited. Digger – Sierra and the Case of the Chimera Killer is already on Amazon’s list of best selling books.

Hard copies will ship on Monday, May 23, and e-reader versions will be available for downloads at that time.

This whole journey as an author is exciting. I was reasonably experienced at my former career. It’s kinda fun being a rookie again and learning lots. Now I just need to figure out how to move the needle and maybe end up in the top 50,000 or so of the country’s best authors.

I am grateful to all my friends who’ve expressed an interest in buying my books. We’re very (very) close to having a product for sale, but I’ve been very (very) cautious about 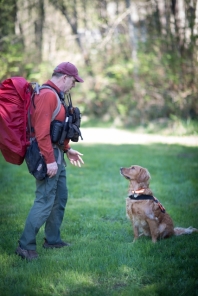 You’re my friend either way, so there’s no pressure to buy. The books will be sold through Amazon, and available in both hard copy and e-reader versions. If you’re going to buy, here’s some things that will help.

The Animal Planet program North Woods Law is a great show about great people. I’m going to take a risk here and hope the Maine Warden Service won’t mind my using their misfortune do do some critical public education.

For years SAR personnel have been telling audiences not to rely on electronics to get them out of the woods. I just watched an episode of #northwoodslaw which bore out that advice in dramatic fashion.

A warden and his dog had just done an outstanding job of finding a missing girl in the woods. The weather was horrible and getting worse, and the girl was hypothermic. She needed to be in the warm and dry ASAP. At that point, the warden’s flashlight batteries went dead, his cell phone failed (battery & signal issue) and the GPS he was depending on for the return trip also stopped working. Two other rangers had to head into the woods, and locate him by shouting.

When leaving any trailhead, there is just no substitute for a real compass. Good ones have glow-in-the-dark features, and none of them require batteries. I talk to people all the time about how their cell phone has “map apps” and a compass….and a GPS…and a flashlight. Well, that phone also has a battery that will fail when you need it most.

I’m not sure if the producers “drama’d up” the story for the sake of reality TV. The narrator did mention that they eventually got out of the woods using a compass. Whether the first warden actually had one and was using it appropriately, or if the others brought one, is immaterial. The lesson here is that all electronic devices fail, usually when you need them most.